This is a a quick blog post to announce that I will be doing a series that introduces developers to Aspect Oriented Programming using a great tool called PostSharp.

In order to make the journey easier for beginners I packaged up some very basic aspects into a nuget package that can be downloaded from the nuget package manager.  Search for PostSharp-Aspects.

Note: Any errors or improvements or if there is an aspect you would like to see added, please let me know.  My contact information is listed in the about area.

A quick definition is that PostSharp is an Aspect-oriented programming (AOP) framework for the .NET platform. It conducts a method known as “static weaving” or “IL weaving”, which means it applies the “Aspects” at compile time after the dll/exe’s have been compiled.

Aspects are code written in C# classes which get turned into behaviors based on the attributes of the code.

AOP according to Wikipedia: In computing, aspect-oriented programming (AOP) is a programming paradigm which aims to increase modularity by allowing the separation of cross-cutting concerns.

Some of the value behind AOP and utilizing PostSharp are:

Below is a chart that I found from an article by Dustin Davis that shows some of the advantages of AOP. 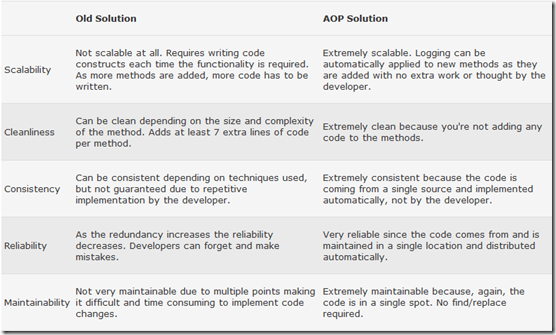 I will go into greater detail about the Aspects included in the next few post.  For now if you would like to play you can do the following after installing the package to your project.

This entry was posted in PostSharp and tagged Aspects, C#, PostSharp. Bookmark the permalink.